We've all seen happy Before & Afters,
but have you ever seen a happy After-After?

Losing weight is difficult, and keeping it off can be even harder. On most diets, you lose muscle as well as fat, which makes it easier for the weight to come right back. Why? Because muscle is key to burning calories, so less muscle means you can't burn calories like you did before. You've tried everything else. Now try what works. Shaklee 180® is a clinically proven program that helps you lose the weight AND keep it off.

Be a happy After-After, with Shaklee 180®.† Quite possibly the last weight loss program you'll ever need.

Shaklee 180 Program has helped us become a better us. Our health has improved, we have more energy and sleep better.

My wife, Joellen Emmerick, began following the Shaklee 180 program at the beginning of the year. We have been consistently drinking our shakes, eating healthy snacks, having sensible dinners, and also exercising regularly. I lost 80 lbs and Joellen has lost 30. I started at 303 lbs and Joellen started at 170 lbs. We are both feeling better, moving easier and sleeping better. I had my annual physical in March and my numbers were significantly improved over the previous year.

I am loving all the positive changes Shaklee 180 has brought in my lifestyle.

I am so excited to have lost 25 lbs on the Shaklee 180 Program. I feel amazing and have more energy throughout the day. I am loving all the positive changes this challenge has brought in my lifestyle. I love the Shaklee snack bar and take it with me on my nature hikes.

Shaklee 180 has helped me gain my confidence back. I am so happy to have lost all my baby weight.

I am so happy to have lost the weight I gained after having two children. Over the years I tried several weight loss programs only to have some results in the beginning but plateau and then lose heart and gain the weight back. With Shaklee 180, I have already lost 21 pounds and 12½ inches and am motivated to reach my target weight! I feel happier and more confident and want to inspire others to do the same.

I can fit into my old clothes easily now and it's such a great feeling!

The Shaklee 180 program has given me my energy back! I used to sit on the couch and be so tired all the time. After starting the program, my energy has been through the roof! I have energy to teach all day, then come home to play with my 2 year old daughter and cook supper. I even have energy left over to go for a walk in the evenings! My clothes are fitting so much better! I have things in my closet that I haven't worn for a while because they were too small. I can fit into them easily now! 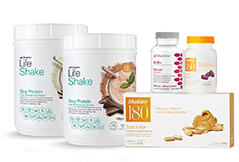 Everything you need for your first two weeks! The perfect starter package to try out your healthy weight journey. Learn more. 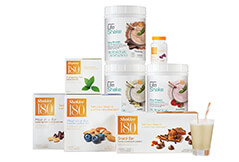 Everything you need for your first month. The perfect package to start your healthy weight journey. Learn more.

**Based on cumulative sales of Shaklee 180 shakes and after the expected average weight loss.